Event Medical Team has licensing and accreditation by the Victorian Department of Health to provide our service to events across Victoria. This licensing allows our medical staff to carry pain relief, respiratory and cardiac drugs and other medications and when required administer these drugs onsite without an emergency ambulance or doctor being present. Event Medical Team has its own fully equipped ambulances, and staff trained in patient management techniques and procedures. All of our staff are experienced paid professionals and our staff have worked at some of the state’s highest profile events. The treatment of all patients is documented and these documents are available to you in our post event report.

At the age of 12 Chris completed his first First Aid Certificate and has never looked back. He developed a keen interest in event first aid, where he volunteered as an event first aider for many years and was promoted through the ranks. This drove his passion for patient care further where he completed his training at Victoria University in 2004 and his talent for training where he completed his training in 2002. Chris continued in the corporate first aid space until 2007, moving into the Event Standby space full time in 2007.

In 2008 Chris had the opportunity to work in the Oil and Gas Sector as a specialist paramedic, and fly-in-fly-out into Papua New Guinea for a period of time, building his expertise and love for the work. Since returning to event standby, he has made an impact on the industry. Chris currently owns and manages a number of event services business such as Medical Response and Event Medical Team, and has owned & operated an RTO specialising in Paramedical Science and First Aid. He is currently the Paramedic Team Leader at Winton Motor Raceway, an NEPT clinical instructor and recently co-founded the Pre and Inter Hospital Providers Association (PIHPA) where he was recently was elected as Secretary. 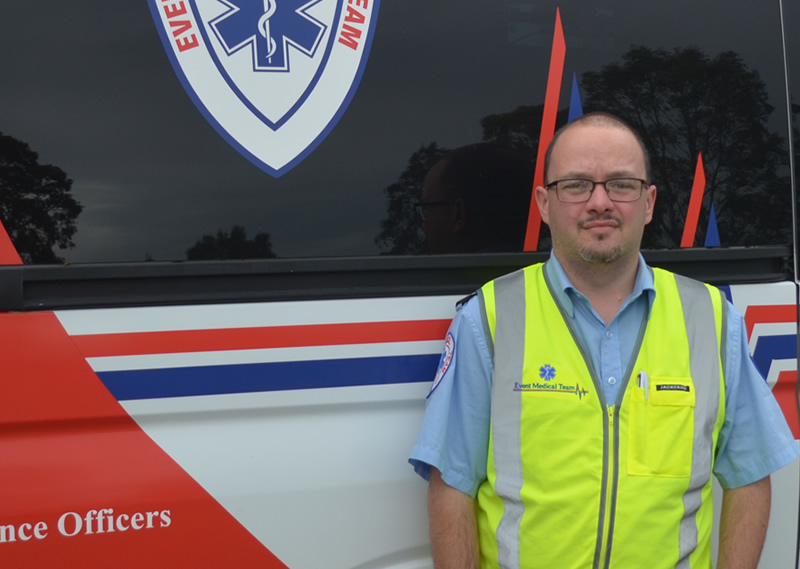 Mark’s experience in the Event Medical sector started from a young age volunteering from the age of 13 with community first aid, attending multiple events and DISPLAN, and assisting with all aspects of event management. From this, he found a passion for nursing and has been in his chosen profession for over 17 years, working in multiple roles from aged care to emergency departments. In his down-time he volunteered with the Country Fire Authority Victoria, attending multiple local incidents and campaign fires and has also been awarded the National Emergency Medal.

Mark’s role within Event Medical Team is to ensure the organisation operates at the forefront of its competitors. Mark has over 20 years of Event First Aid experience; assisting in planning and execution from small – large scale events. He will work closely with you, to assist in the smooth running of your event.